Having seen hints about Divine Proportions online, along with press information for my preview, I was eagerly anticipating the show. I received my free press tickets, in exchange for a review but, had I paid for the show, I’d still have loved it.

Rather than theatre, cabaret or dining alone, Divine Proportions blends all three, with a generous sprinkling of glitter and hedonism. 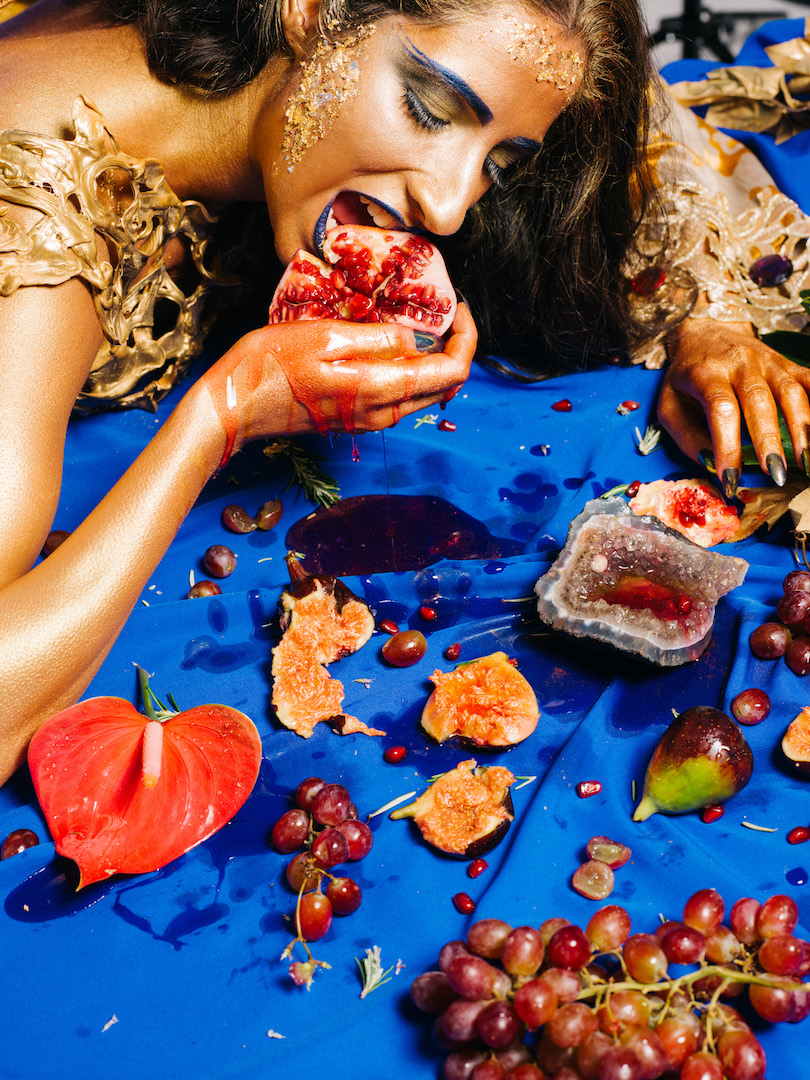 After arriving at The Vaults down a graffiti decorated tunnel, I was whisked into another world: the underworld, to be precise. Maenads mingled with the crowd, smiling, teasing and generally setting the scene. Their head-dresses were particularly noteworthy, designed by Isla Campbell, and overall the costumes were edgily lovely.

After nibbling on warm salted bread with oil and vinegar, and sipping drinks (not included but it was a reasonable £22 for a bottle of red) the stage was set for Dionysus (Helen White) to appear.

Known as Di, they abhor the gender binary but exude sexuality in a way that got all of our mixed gender/sexuality party aflutter – and what a pair of lungs. After enjoying them making sweet music, it was impossible to resist their invitation to go upstairs.

The food was perfectly portioned and delicious: caperberries, chilli and olives with particularly tasty sweet pickled onions got the juices flowing, and a limoncello, reisling bitters, cardamon vodka and turmeric foam was sweet and refreshing, while the pink sea bass ceviche with seaweed and citrus dressing was the sea on a fork (or perhaps trident).

The main course left me with a newfound love of chargrilled romanescu, which accompanied a tender guinea fowl breast, celeriac puree and mixed vegetables. (Veggies could opt for a seaweed salad with cured kohlrabi in place of sea bass ceviche, and a courgette stuffed with bean stew for the main course).

If I had to criticise, the citrus dressing on the starter was fractionally too generous and the red wine sauce with the guinea fowl a tiny bit too reduced for my taste, but I’m grasping at straws as the overall meal was delicious. The dessert was particularly memorable, with figs, honey and pomegranate seeds perfectly complementing the coconut cream, which I’ve been yearning for ever since: a magical taste memory.

As you eat, on tree-bedecked tables under fluffy clouds, the gods play out their stories. Aphrodite (Molly Beth Morossa) wants worshipping – and gets it (every night, I suspect). Secrets are divulged, wax is dripped and by the end of the evening, you are more than happy to follow Persephone (Charlie Bouquett) to see what lies beneath – as the flames of the underworld get hotter…

Produced by immersive party creator Laura Drake Chambers, designed by immersive theatre expert Samuel Wyer (Alive Underground, The Twits), written by Cressida Peever and directed by co-founder and director of Pecs: The Drag King Collective, Celine Lowenthal, Divine Proportions is an experience that will leave you with a smile on your face the morning after.

Hot, decadent and delicious, dress up and prepare to dance with deities  and have a darkly delightful, heavenly night. Get tickets from £35 through The Vaults website.